Outbreak of borers on oaks 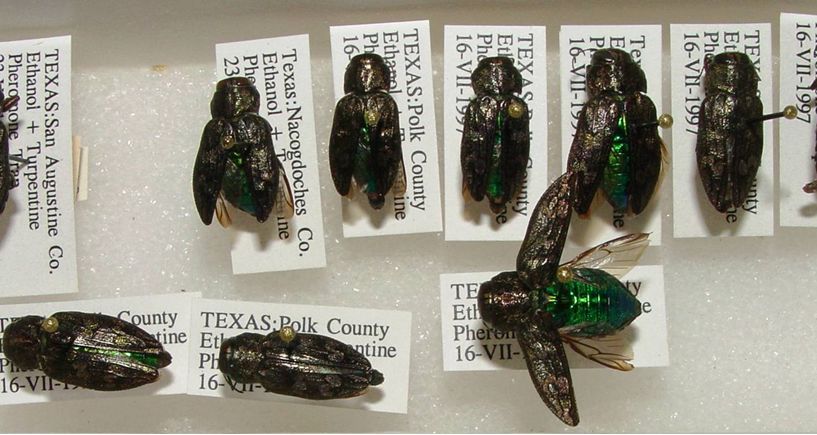 East Texas foresters are receiving numerous calls about insects killing their oak trees.  I have also been getting calls and e-mails about this.  I am seeing a lot of activity from metallic or flat-headed wood borers on recently dead and dying oak trees (and other trees).   These borers are basically scavengers on dying and recently dead trees.  With large trees, the beetles may be only attacking parts of the tree that are dying or recently dead.  These beetles initially infest the cambium and then bore into the wood.  In order for them to successfully infest the cambium, the cambium cannot be healthy.  That is why treating for the beetles to prevent additional attacks is “after the fact” and does little if any good.  The borers are there because the trees have other problems and the other problems relate back to lack of water. These borers are NOT killing the trees.

The borers are the insect family Buprestidae and the genus Chrysobothris.  They have a bronze metallic underside and the wings (elytra) on top are a gray to black color.  When they spread their wings to fly, they reveal a bright metallic green color on the top of their back (abdomen).  The drought of 2011 has caused tremendous problems for trees and various fungi and insects are responding to the drought-stressed trees.  The metallic wood borers you are seeing are a part of this complex of insects and fungi.  Chrysobothris is a large genus that contains at least 134 species in North America.

Here is a link to information about one of the common Chrysobothris species.  It has a large list of hosts including oaks, even though its common name is flat-headed apple tree borer.

Below are two photos I took of various Chrysobothris in the collection at the Forest Health office in Lufkin.

In the photo above you can see the bronze metalic color on the underside of the beetles, their gray to black wing covers (elytr), and the exposed green back (abdomen) of one of the beetles that lost its elytra.  These beetles came from an emerald ash borer trap, but they are also common on dying oak trees. In the above photo is Chrysobothris shawnee.  You can easily see the green color under the wings as well as the gray to black color pattern on the top of the wing covers (elytra).

I hope this information will be helpful.