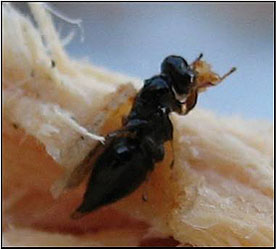 What we know:
◦At this time only found on Pinus eldarica (Afghan pine).
◦Larvae construct pits in the xylem.
◦Apparently a chalcid wasp; family Eurytomidae.
◦Trees have been infested in past years as indicated by old pits covered with new wood.
◦Infests trees of all ages.
◦On older trees most infestations are on branches and twigs in the upper crown.
◦On younger trees larvae are usually found on smooth bark on the main trunk in the top 1/3 of the crown.
◦Multiple wasp attacks kill smaller twigs and branches, stressing the tree. Infested pines can survive low density ttacks but severely-infested trees may eventually die.
◦Environmental factors could be influencing the chalcid attacks.