View the recorded webinar with Dr. Appel and a panel of experts: Texas Trees and the Blizzard of ‘21: What’s Next? Here (free for members)

Driving across Texas has been an interesting occupation for foresters and arborists these past few weeks. Many trees appear as healthy and vibrant as they have ever been, but littered in among the growing green are an equal – and seemingly arbitrary – population of barren oak trees.

This bizarre phenomenon has intrigued professionals across the state – especially since oak trees, and particularly live oak trees, are known to be an incredibly resilient species. Now, months after Winter Storm Uri swept across Texas in mid-February, many of them still aren’t leafing out. Standing in contrast to their vibrant and vivacious brethren, they look dead. 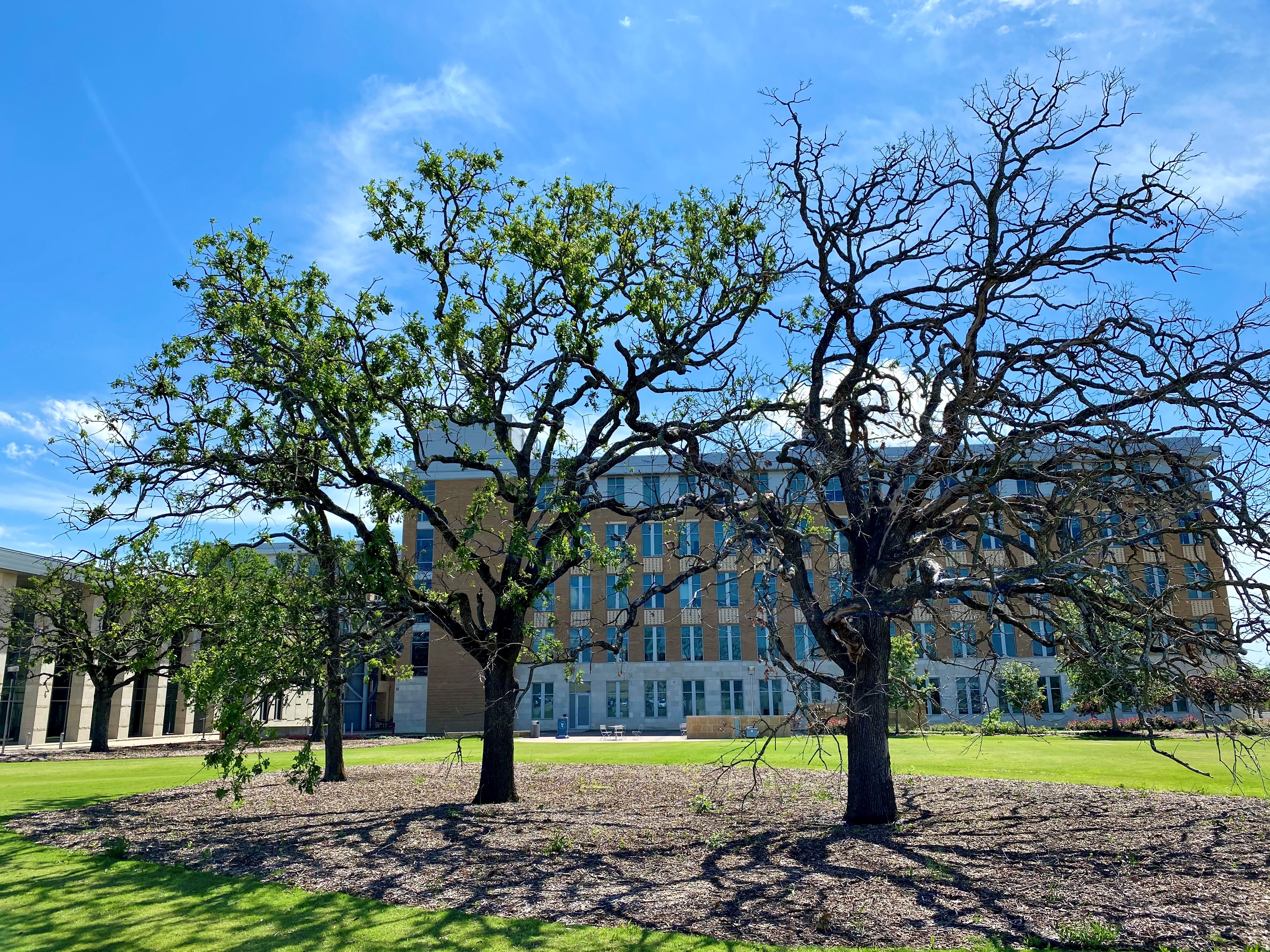 Courtney Blevins has spent almost 40 years with Texas A&M Forest Service, and he can’t recall any past freeze leaving so many oaks looking bare this late into the spring.

“I’ve been telling people my whole career that the single toughest species we have up here is live oak,” said Blevins, a forester out of Fort Worth. “And yet, it’s the live oaks that seem to be most stressed from this freeze. I’m shocked by that.”

Blevins isn’t the only one. Neil Sperry, a Texas gardening and horticulture expert known across the state, has been stunned by the variability, and the scope, of damage left in the wake of that freeze. Followers of his Facebook page have submitted over 2,000 photos of struggling oak trees, including all varieties of species and from every single region of the state.

“I have been in this business professionally since 1970, and I’ve never seen anything like this,” said Sperry. “We think of oaks as permanent as concrete and steel, and for them to selectively be affected by this freeze is particularly odd.”

WHAT EXPERTS ARE SAYING

Blevins and Sperry have spent the past few months responding to residents and landowners who are concerned about the health and condition of their trees. But as the weeks ticked past—and oak trees across the state still didn’t leaf out—Sperry decided to pull together a blue-ribbon panel of certified arborists, foresters, horticulturists, Extension specialists, nursery leaders and garden communicators to send out a unified message. Their advice to landowners who are wondering what they should do, and whether they should cut down their valuable trees, is a simple one: just wait.

“If your tree is dead, there’s no rush to take it down,” said Blevins. “That’s one big mistake people are making. They’re in a big hurry to take that thing down, thinking it’s dangerous to leave a dead tree standing, and it’s not.”

Trees can stand firm for years after they have died. And while nobody wants a dead tree in their yard for long, landowners who are eager to replace their dead or dormant trees should note that spring isn’t the best time of year to plant trees in Texas, anyway. Instead, Texans should plant trees in the fall or early winter, when the roots are able to grow and further establish the tree.

But Blevins and Sperry are more concerned about landowners cutting down trees that could have recovered, if just given the time.

“I think most of the oaks are going to come through okay,” said Blevins. “If your tree is leafing out really late, it’s obviously stressed. But most trees die from a combination of stressors, not just one thing.” 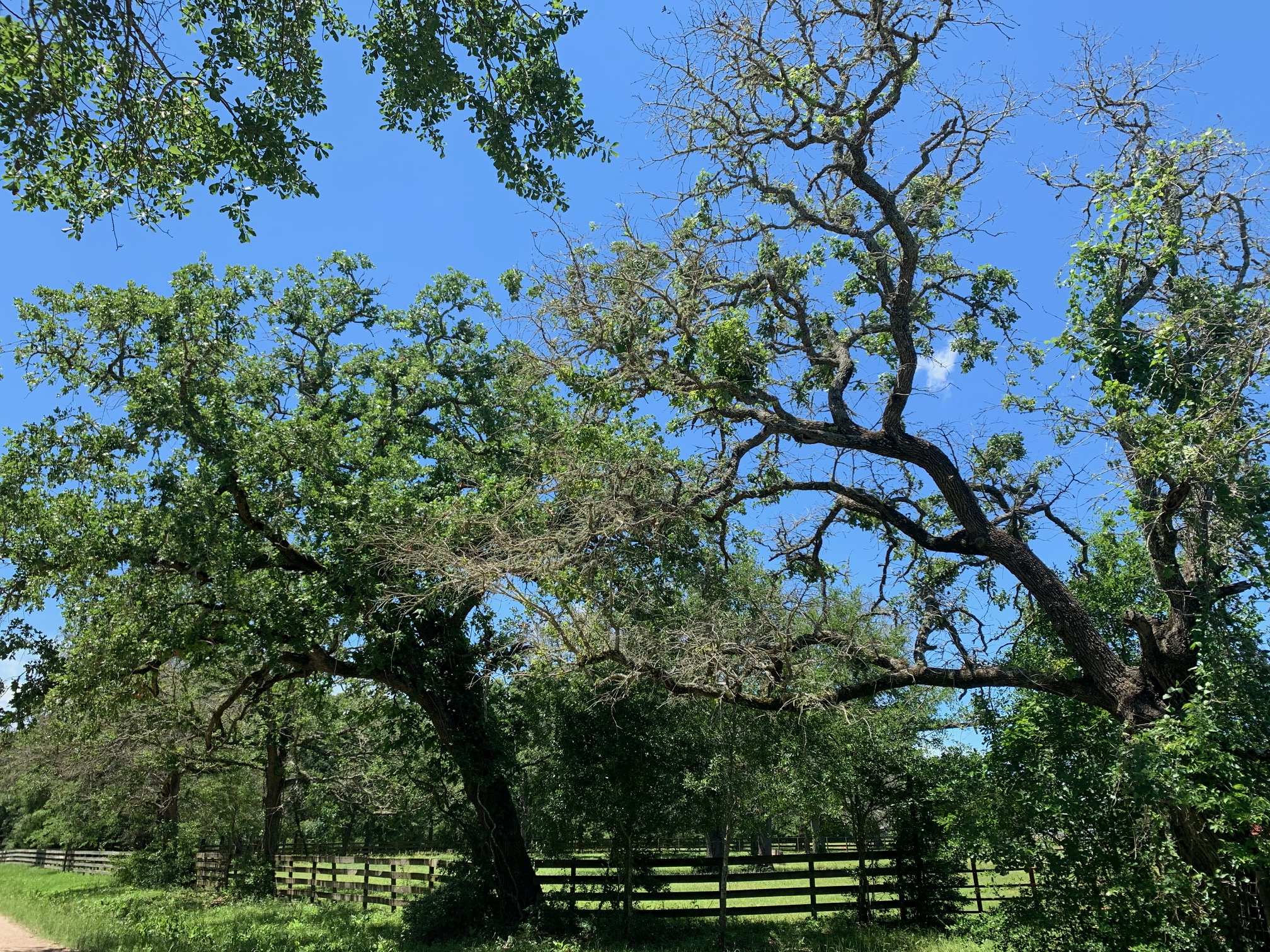 With a prolonged, deep freeze like the one brought on by Uri, experts expected some kind of response from trees – primarily fine-twig and branch dieback. The outermost branches and stems of even the most established trees lack insulation, and are at risk of freezing in very low temperatures. This is a partial explanation as to why some trees have growth closer to their trunk and innermost branches, while the edges of their canopies remain bare – but it doesn’t explain why so many trees are leafing out late, or not at all.

One popular theory suggests that the trees that are struggling right now were likely stressed or struggling before the winter storm, especially given past conditions.

“It’s been a tough decade for trees,” said Gretchen Riley, the Urban and Community Forestry Program Leader at Texas A&M Forest Service. “In 2011 we had unprecedented drought across the state, and we lost 500 million trees. Those that we didn’t lose, they experienced pretty heavy stress. And in the past decade, we’ve seen a lot of tree mortality that really had its roots in that drought.”

Riley attributes the potential mortality of mature oak trees to that drought and other, pre-existing conditions, but she attributes the overall delay in leafing out to a natural, physiological process that was interrupted by the freeze.

Every February in Texas, trees begin the process of pulling nutrients from their roots up into their branches and the finer twigs. This combination of sugar, starches and water is then used to produce buds, which – over the course of a few weeks – become leaves, and supply the tree with food that can again be stored in the roots for the following winter. However, because there is a liquid component to this energy, it is susceptible to freeze damage – and once frozen, it cannot be repurposed.

It’s also worth noting that the week before the freeze, temperatures reached as high as 80° F across the state. Warm temperatures like that often cue trees to begin the process of budding out, and in Texas late-February is as common a time as any for trees to start leafing out.

“That super freeze froze back a lot of those buds that were about to open up,” said Blevins. “Now, the trees that were preparing to bud out have to generate a whole new set of buds to leaf out, and that takes time.”

This theory would best explain the variability of the impact that Texans are seeing on their trees, since there doesn’t appear to be much of a correlation between which species of oak have been hit the hardest, or why urban trees are experiencing equal delays in leafing out.

It would also help explain why some of the trees that were late to begin leafing out are still struggling. With the last of their energy reserves being put toward re-producing buds and leafing out, they have little energy left to put toward defense. In Central Texas, in particular, Texas A&M Forest Service biologists are seeing a significant population of caterpillars. With the trees being more susceptible to disease pathogens and insects, many are losing their leaves to insects as they’re actively trying to leaf out. 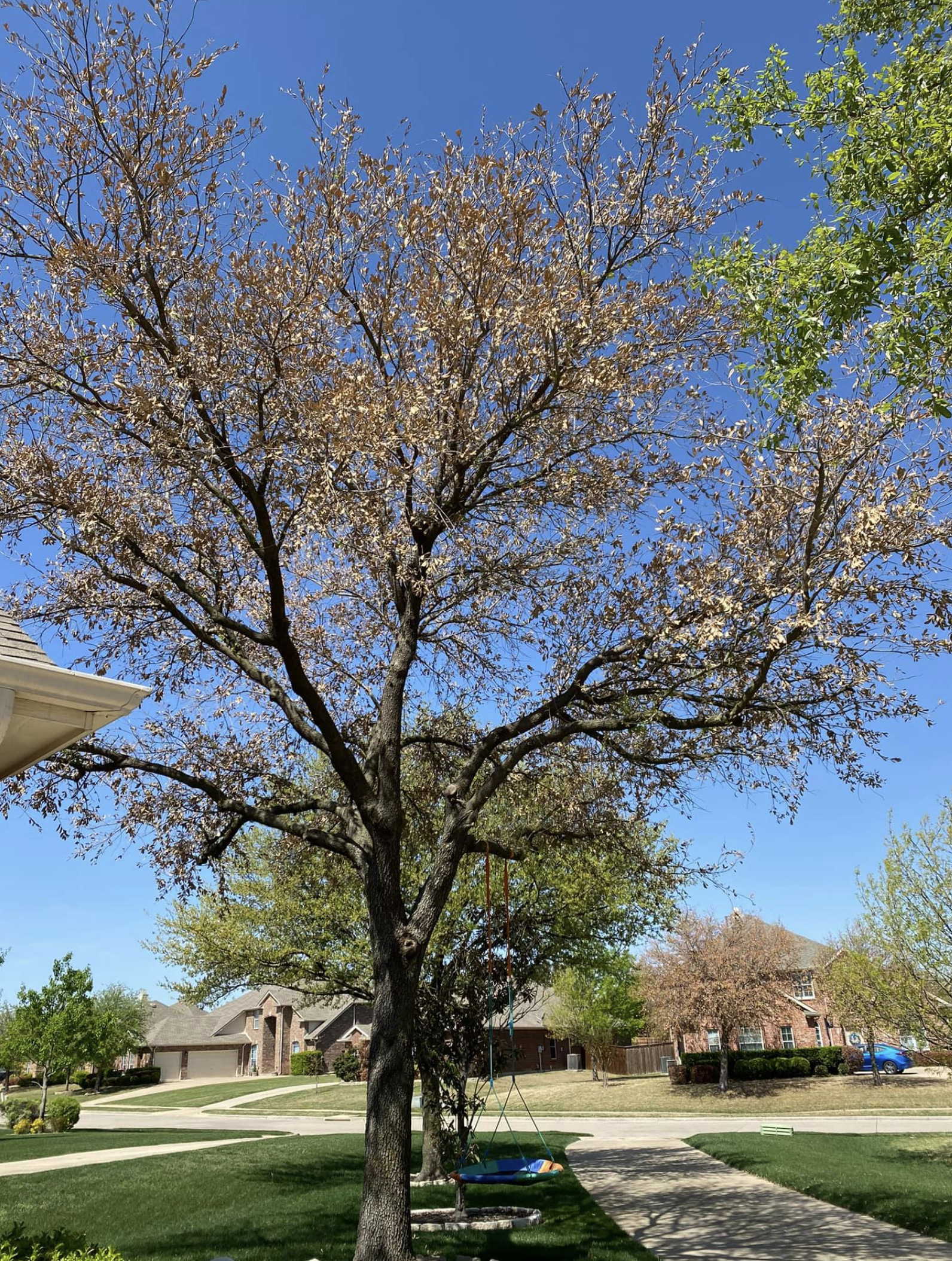 WHAT YOU SHOULD DO

While this helps explain what is happening, most residents are more interested in how they can help their trees. Unfortunately, experts are saying there isn’t much you can do, and there is very little that you should do.

“They’ve been stressed, and they don’t need any more stress,” said Blevins. “So I’m telling people, when we get into the heat of the summer – especially if we have abnormal heat, like we’re supposed to this year – one thing you might want to do is maybe give them supplemental watering once or twice.”

Other than the occasional watering—and you don’t want to overwater your trees, lest the roots be flooded with water and lack the oxygen they need to breathe—Blevins recommends patience. Even fertilization should be avoided unless the tree is experiencing a specific nutrient deficiency. Fertilization leads to growth spurts – and when a tree is putting its energy into growth, any energy that could be applied to defense goes down.

This information can be difficult for landowners and tree-lovers to absorb, since it is our tendency as stewards to want to do something. However, when it comes to our trees – especially our mature trees – often times, the more we do, the more harm we cause.

“The best thing to do with mature trees is nothing,” said Riley. “Trees are very sensitive to change. And many of these mature trees may be a hundred years old. They’ve done really well without us, they’ve done their best to adapt to living around us, and most things that we would go in and do to them now are more stressful to them than helpful.” 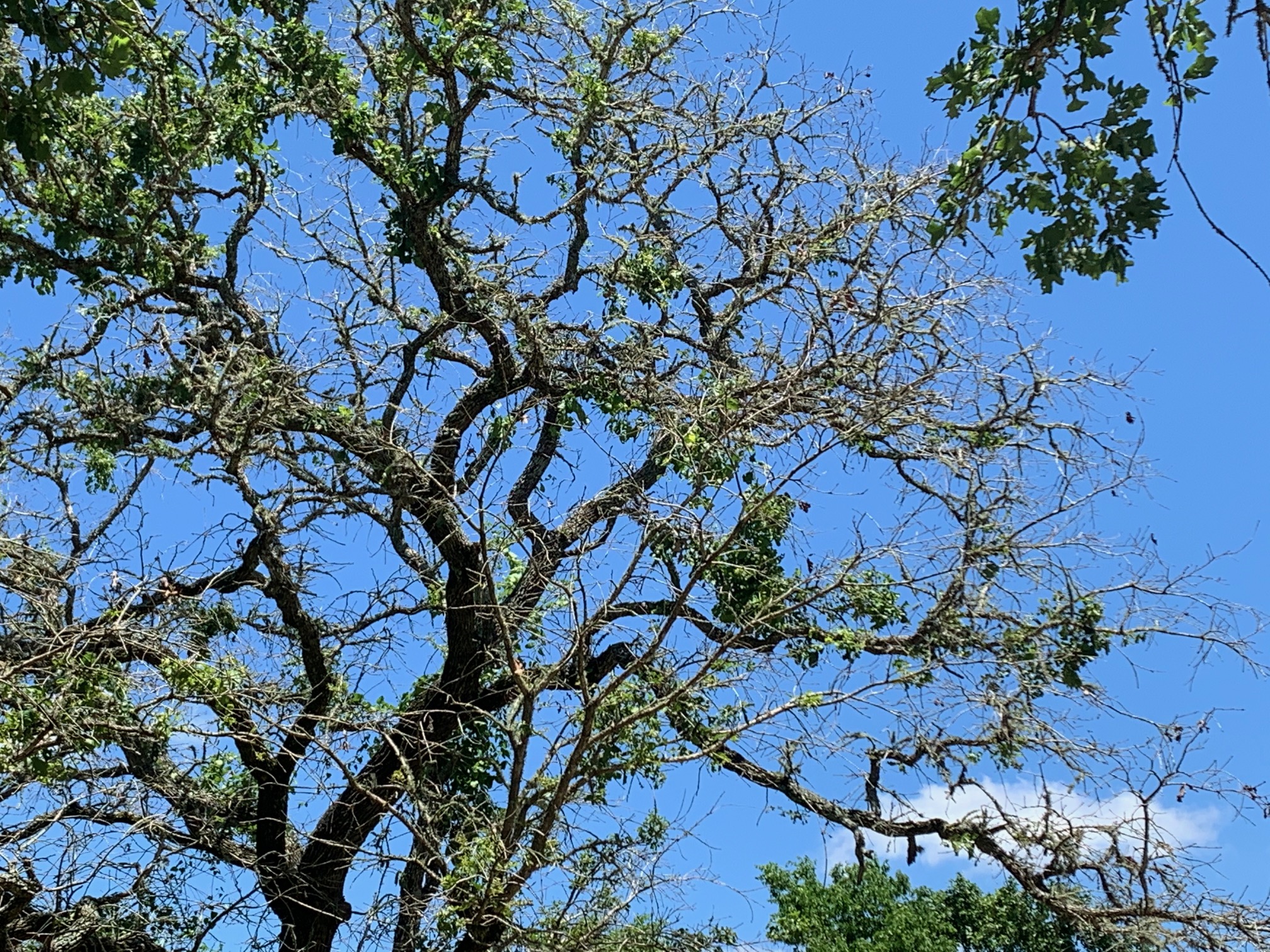 With the list of stressors piling up this year, it’s likely that many of the trees which were late to leaf out will continue to appear splotchy, sickly, or partially bare. In Riley’s experience, that is not unusual in itself, and many trees should be okay if they’re given the opportunity to leaf out normally next spring.

That being said, the trees that continue to appear bare may not come back.

“If by mid-July they have zero leaves on them, that tree’s dead,” said Riley. “If they have a small, poor showing of leaves, you might wait until next year to make that call. It could improve.”

In any case, the consensus among professionals at Texas A&M Forest Service and across the state is simple and direct. Be patient.

“Just wait,” said Sperry. “These trees are coming back at their own pace. Some of them will be lost. But the important word continues to be ‘wait.’ Don’t start cutting those trees.”

If you’re concerned that the trees on your property are suffering from more than just stress, visit our page After the Storm. For more specific concerns, contact a certified arborist. You can find professionals in your area through the Texas A&M Forest Service’s My Land Management Connector app, or at treesaregood.org/findanarborist.

Texas A&M Forest Service will continue to monitor and study the impact of winter storm Uri on our state’s trees. For more information, and to stay up-to-date with our findings, make sure and follow us on social media at @TexasForestService, and on twitter at @TxForestService.